Unlike Morgan's standard move-in day, students were greeted by a masked President David Wilson and a sliver of the traditional Office of Residence Life and Housing staff 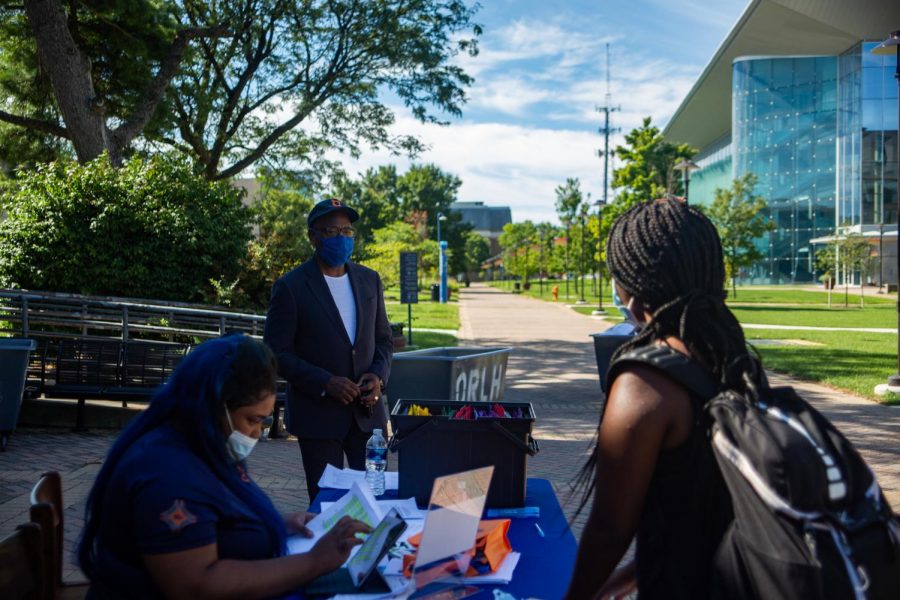 Days before the first day of a virtual semester at Morgan State, staff moved 320 residents into university housing. But once students arrived on campus, not only were most of the dormitories closed, but The Office of Residence Life and Housing staff that traditionally assist with move-in day were drastically cut.

The decision came after Morgan’s choice to not utilize several on-campus housing because of their communal bathroom feature to include Blount Towers, Rawlings Hall and O’Connell Hall. In addition to Marble Hall Gardens Apartments and HH Midtown, which are both located off-campus, Cummings Hall and Baldwin Hall opened with half of its traditional occupancy.

“We have three buildings that are closed and we just could not afford to bring all those staff members back,” said Kevin Banks, Vice President of Student Affairs.

Students moved into their housing assignments during Labor Day weekend and according to Banks, the decision was all by design.

“We were specific about using Labor Day weekend because we wanted students here and not out at the beaches, barbecues and having the chance of contracting COVID-19,” he said.

In an attempt to prevent the spread of the virus, students were required to verify a negative COVID-19 test result to the Harriet A. Woolford University Health Center to move into their housing assignments over Labor Day weekend. Each student received a private room and will share a bathroom with one other person.

Students were given a 90-minute block to move into their dorms with the assistance of 2 family members. Between each check-in window, there was a sanitization period where faculty cleaned elevators, door handles, and other physical objects that might have been touched by the previous party.

Students who reside on campus are required to wear facial coverings, practice social distancing throughout campus and participate in bi-weekly COVID-19 testing in the University Student Center to uphold their housing contracts. Visitation has also been suspended to lessen the chance of a viral spread.

Symone Jones, a junior fashion merchandising major, said while Morgan has implemented safety guidelines to prevent a potential scare on campus, it’s left her and other students isolated and lonely.

“It’s a lot of pressure to maintain the regulations because we’ve been told that our behavior and actions sort of dictating the future of on-campus living at Morgan,” she said.

According to Banks, the university is sure that the first batch of COVID-19 tests will include positive results and when that happens, the university has prepared Thurgood Marshall, which is adjacent from Rawlings Dining Hall, as the designated isolation facility.

Inside Thurgood, staff members will be prepared with thermometers, sanitizers, cleaning supplies and food. Infected students will also receive check-ups from Harriet A. Woolford University Health Center officals and are prohibited from leaving the building during their isolation period.

Banks said the fall semester will be a test run and by November, the university should be able to decide on its plan for the spring.

“It’s a semester unlike one I’ve ever experienced in my whole career, Banks said. “We’re learning—we have a research team that’s working with us to monitor and take notes.