Black Lives Matter: A letter to my neighbor

While protesters and activist march against gun violence, they should also take a stand against violence in their own communities 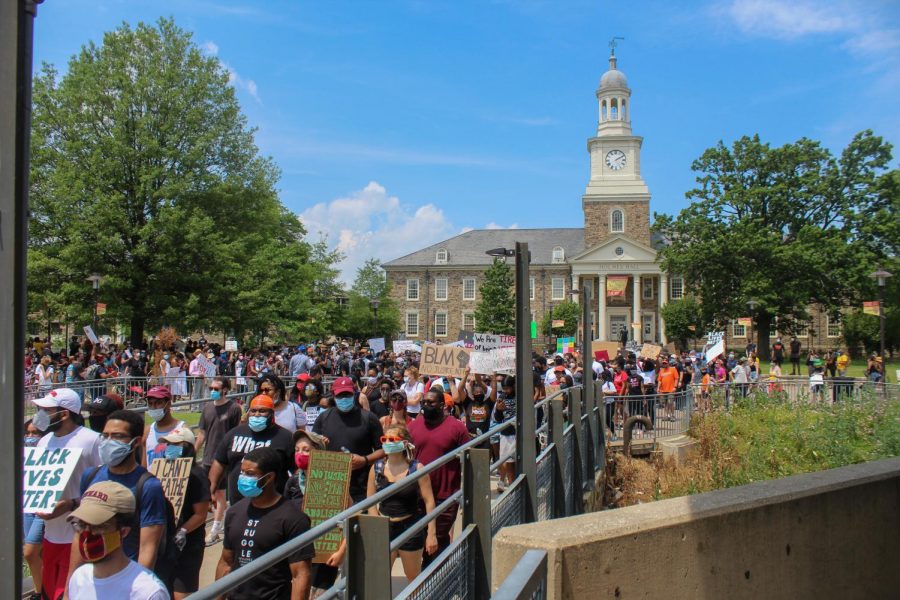 Hundreds of protesters gather by Holmes Hall to begin their march.

We’ve listened to the cry of protesters and followed the paths of the peaceful marchers, but, do black lives really matter? Across the country people rose up in protest of the horrific scenario that took George Floyd’s life. We’ve replayed the deaths of black men and women whose lives were taken at the hands of police officers before George Floyd, and marched for reform. In some states, laws were passed to prevent police officers from using use choke holds, making it a criminal action. In other states, laws were passed against no-knock warrants.

But while we are passing laws, marching and throwing our fist in the air at the police officers, where are the marchers for the deadly crimes that are plaguing our communities?

Shootings and homicides have spiked in major cities across America. As of July 15, Baltimore had 175 homicides and 336 non-fatal shootings and the majority of the suspects and victims were black men. During this time, I have not seen a protest for the innocent children whose lives have been cut short. I have not seen a protest to rid our communities of the guns or a protest to stand up and rid the city of the defiant ones that keep our neighborhoods dangerous and keep our good citizens on lock down.

Yes, racism is alive and reform is long overdue. But our sole fight should not be against the police officers, “the white man,” or the government.

There should be a fight in the black community so deep that we take our streets back, we take our neighborhoods back and we give people hope of a safe place to educate and raise their children. Local organizations that focus on male reform, can help to take our young men back from the streets. Some of them want to be rescued and don’t know how to get out.

While no organization is perfectly run, as citizens, we must work together to help with the clean-up and safety of our neighborhoods. Our children should be able to play in front of their stoop without fear of being gunned down. Our elders should not be victims of gun violence while crossing the street.

Utilize your resources. No street lights? Call the city and report it. Suspicious people on your block, call the non-emergency number (443-263-2220) for the Baltimore Police Department.

Just as it takes a village to raise a child, it is going to take a village to stop the senseless gun violence in Baltimore City. After all, Black Lives Matter should not only be a protest, but a state of mind.

Cara Williams is a senior at Morgan State’s School of Global Journalism and Communications and a retired police officer.