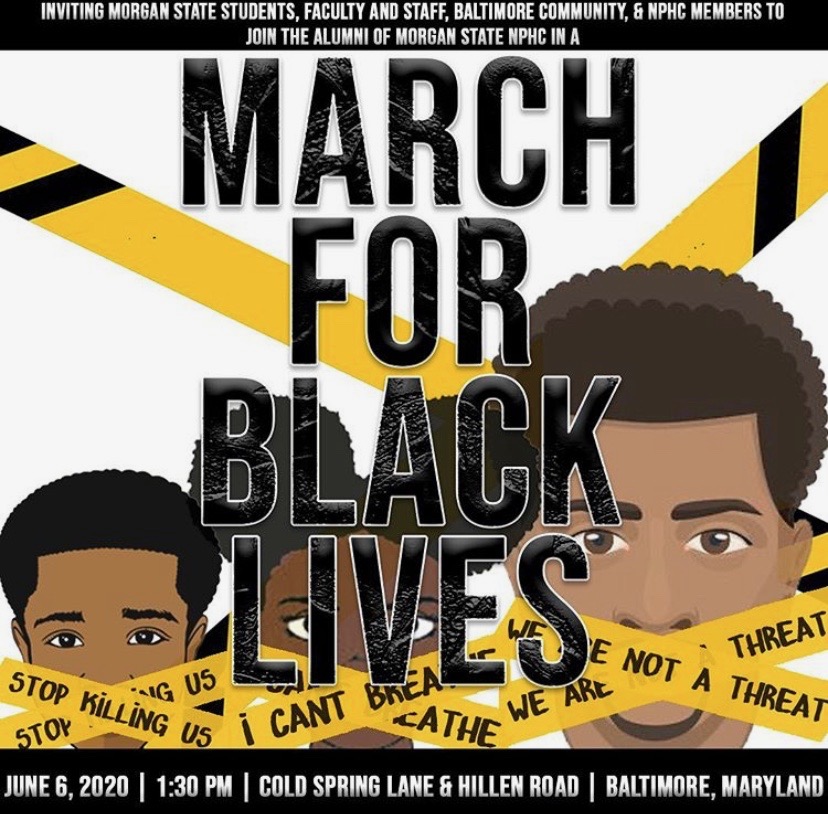 Over the past week, demonstrators across the nation have gathered to protest police brutality and racial injustice after the death of George Floyd. On Saturday afternoon, the alumni of Morgan State’s National Pan-Hellenic Council will lead the community in a peaceful protest along Hillen Road and Coldspring Lane.

As tensions mount across the country, grassroots organizations, civil rights activists, and other supporters of the Black Lives Matter movement continue to organize peaceful protests in honor of Floyd, Breonna Taylor, Ahmaud Arbery, and the millions of black Americans affected by racism.

Although the event is not officially sanctioned by Morgan, university President David Wilson recently addressed Floyd’s death and encouraged peaceful protests in a written statement.

“Let’s stand up for the value of our lives, but if you feel compelled to protest this great injustice, please do so peacefully and with the best interest of your fellow man and woman,” Wilson said.

Last month, SGA President Alexander Freeman also released a written letter on the justice system and the importance of protesting.

“As student leaders, we cannot sit and wait for injustice to happen on our campus to our students, or in our communities before we speak up,” Freeman said.

The rising senior was not alone in his call for action for the Morgan community to stand up against the injustices African Americans experience.

The “March For Black Lives” protest, organized by 2019 graduate Allahsha Farmer, is the first official protest on behalf of the university. The march is set to start on Cold Spring Lane and Hillen Road on Saturday, June 6 at 1:30 p.m.

Farmer, a member of the Delta Sigma Theta Sorority, collaborated with other alumni members of Alpha Kappa Alpha Sorority, Iota Phi Theta Fraternity, Zeta Phi Beta Sorority and other organizations of Morgan’s NPHC to arrange the demonstration. The alumna said her desire to protest extends to represent every African American life that was lost due to police brutality and racial injustices.

“Their lives have been taken away from them, leaving their kids, mothers, sisters, and brothers mourning because of the justice system,” Farmer said.

Morgan State is the largest HBCU in the state of Maryland and through the course of Saturday’s protest alumni, faculty, and other guest speakers plan to raise their voices against the systematic oppression that affects the lives of brown and black people in this country.

Chinedu Nwokeafor, who graduated in the spring, will be one of the guest speakers on Saturday and intends to discuss the ongoing issue of racism in this country.

“We’re here to discuss the collection of problems we’re facing in America. But more or less about the hunting of black men and women as it pertains to the police and government,” Nwokeafor said. “We’re still being hunted and gunned down like animals and within the last 10 years things have gotten a little bit crazier because it’s so frequent.”