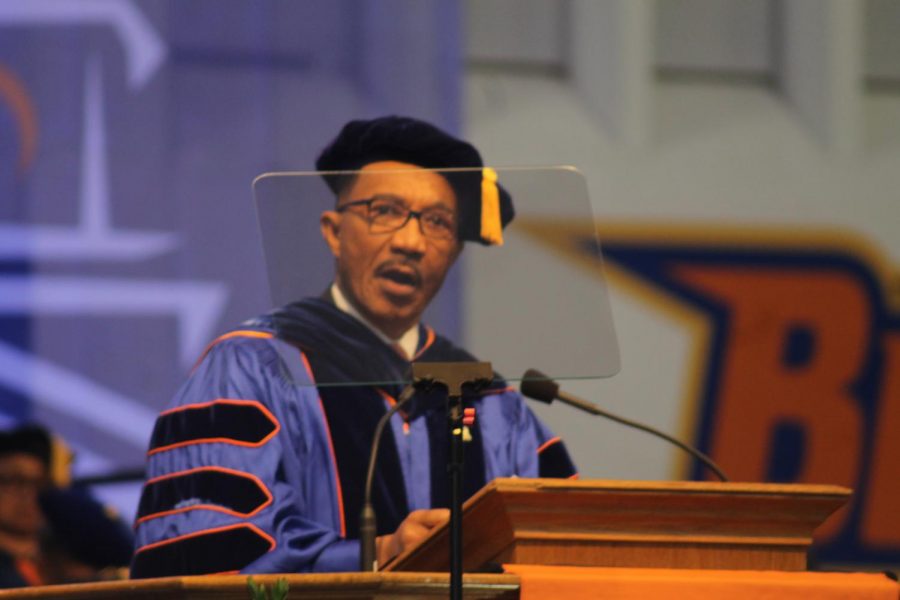 Mfume, a Morgan graduate and former station manager of WEAA (88.9 FM) will likely face Republican Kimberly Klacik, in November’s general election. November’s vote will be a rematch of last month’s election, which Mfume won by a considerable margin.

In his victory speech Tuesday, Mfume explained that there is no shortage of issues that needs to be handled within the district, which includes the area surrounding the Morgan campus.

Mfume said he has not given up the fight against the coronavirus pandemic and the toll it’s taken on the city.

“I want you to know that since day one of returning back to the Congress of the United States, all of my energy, all of my focus, has been on using science, data, and common sense to help us get through this dark day in our nation’s history,” Mfume said. “We must find a way, I think, to support those individuals and those families who haven’t had a paycheck in weeks.”

Voters cast their ballots Tuesday in an election cast primarily by mail, out of concern over the coronavirus pandemic. Although officials encouraged voters to mail-in their vote, limited in- person voting centers were available throughout the state, in part over concerns from some that their ballots would not be counted, if mailed.

Indeed, a number of city and state residents complained that they either did not receive their ballots or received them too late to mail them back in time to be counted.

Morgan student Zion Thorton said she’s glad she decided to cast her vote in-person at the Mount Pleasant Church and Ministries, on the 6000 block of Radecke Ave.

“I was really, really excited to vote (Tuesday),” Thorton said. “When I was leaving out, it just seemed like there were a lot of older people out. I don’t want to say that I was the only young one because that is a stretch, but it’s definitely a generational gap when we’re out here.”

In Baltimore City, lines at voting centers were long and polling places were kept open past the scheduled 8 p.m. closing time to accommodate all who were waiting to vote.

In addition, the state elections board reported that errors on ballots may have impacted the race for the City Council’s First District seat.

In a statement Wednesday, the board said: “During the ballot printing process, the State Board of Elections discovered a small proofing error in the ballot title for the Democratic contest for (Baltimore City) Council District 1…. While the error was corrected in the official voting database, the error was not corrected on a portion of the ballots that were mailed to voters in District 1.”

In Baltimore, thousands physically went to the polls and voted in-person for nominees for three congressional seats, as well as for mayor, comptroller, City Council president, and all 14 City Council positions.

Mail-in votes are still being counted and the results won’t be finalized until June 12.

Voters in line expressed the importance of voting for congressional candidates, especially during this special election, but some also stressed the need for people to exercise their vote for local positions as well.

Voters arrived at the polls wearing face masks and gloves, as well as carrying and using hand sanitizer.

Kim Thorton, 50, said, as a mom, she repeatedly stressed to her children the importance of voting, as well as the duty of people, especially blacks, to go out and vote.

“Our ancestors, you know, generations before us fought so hard to vote because they knew the importance of this,” said Thorton, the mother of Zion Thorton. “It would be ignorant for us not to vote and not encourage others- our children, family- to vote.”

Shannon Wright led a field of seven contenders for the Republican mayoral nomination. Registered Democrats outnumber Republicans by a 9-1 margin in Baltimore City.

In addition to a tight mayoral race, the contest for the Democratic Baltimore City comptroller nomination was also close.

Incumbent Comptroller Joan M. Pratt, who has held the post since 1995, narrowly trailed challenger Bill Henry, a city councilman. Pratt shared business ties with former Mayor Catherine Pugh, who was sentenced in February to three years in a federal prison on fraud, tax and conspiracy charges. However, Pratt has strongly denied any wrongdoing related to her connection to Pugh. There were no Republican candidates for comptroller.

Currently, state Del. Nick Mosby holds about a sizable lead in the Democratic race for City Council president over City Councilwoman Shannon Sneed and former Councilman Carl Stokes. Aside from presiding over the 15-member council, the next council president is expected to take on a key role in helping Baltimore recover from the coronavirus pandemic.