As graduates prepare for their big day, many will host brunches, drive-thru celebrations and front-porch photo shoots 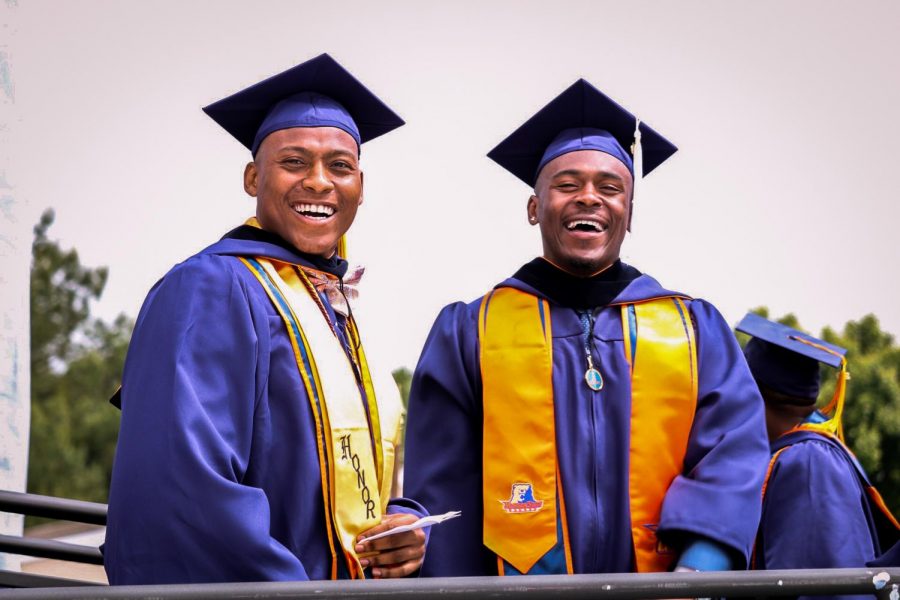 Graduates pose side-by-side in their cap and gown in 2019's Spring Commencement Ceremony.

Graduating senior Samone Crews, an elementary education major will host a family brunch and live stream Morgan’s virtual recognition ceremony from her living room. Her mother is set to deploy next month and won’t be able to attend her rescheduled graduation ceremony in the fall.

According to a university press release, the traditional graduation ceremony has been postponed to October 15. Until then, a virtual ceremony will live stream on Saturday at 10 a.m. to recognize its spring graduates.

“I’m in a unique situation where my mom is being deployed…so I’m mainly celebrating with my family members since my mom is leaving and won’t be able to celebrate with me in October.”

Crews was selected to recite the alumni oath by the Student Government Association on Saturday. But like many students, she is unsure about how the event will operate.

“I’m interested to see what’s going to be said and how they plan to recognize all of the graduates—especially since not everyone will be able to come back to school in the fall,” she said.

“Even though we’re planning this October 15 graduation, we don’t know what that’s going to look like,” he said. “We’re hopeful and positive but again, Wilson is most concerned about students’ safety.”

Despite the derailment of Morgan’s traditional plans, Crews said she appreciates the administration for creating something special for its graduates.

“I feel like Morgan kind of led the way with trying to accommodate students,” she said.

But for other graduating seniors including biology major Alliyah Jamison, who’ve waited years to walk across the stage in spring weather, a virtual experience doesn’t equate to the real thing.

Like many graduates around the world, the coronavirus encouraged Jamison to cancel her graduation plans. To celebrate, she’s planned a drive-thru celebration so her family can take pictures and drop off gifts.

“I appreciate that Wilson is trying to make something out of this, but it just doesn’t feel the same,” she said.

Jamison said while she recognizes the need for safety precautions and appreciates the university’s efforts, she said the pandemic robbed her of a meaningful milestone.

Johnson said the university wants its graduates to be proud of thier accomplishments but also live a long successful life.

“I want to say it’s disappointing to all, but when you step back and put it into context, in the state of Maryland, we’ve lost so many lives since late March,” Johnson said.

Morgan is set to host a virtual recognition ceremony on Saturday at 10 a.m. and it will feature a message from Wilson and Lesia Crumpton-Young, the university provost and vice president for academic affairs. The ceremony will also include a recorded message from the dean of each respective department.