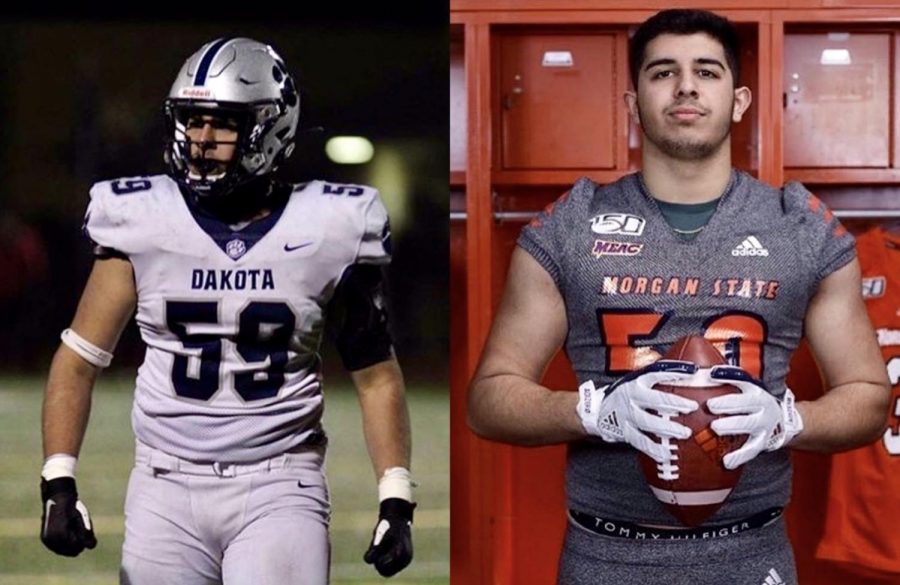 Danny Chaudhry (left) gears up to play along with South Dakota High School and (on the right) he poses in Morgan gear within the university locker room.

National College Decision Day, the deadline for high school seniors to commit to a school, has always been on May 1. But Michigan native Danny Chaudhry, an 18-year-old high school senior, declined seven collegiate-level football offers and committed to Morgan State months ago.

Then the coronavirus (COVID-19) created a downturn in the country’s economic foundation and encouraged 52 percent of colleges, including Morgan State, to extend deadlines until June 1, according to The National Association for Colleges and Admission Counseling. But for Chaudhry, COVID-19 has threatened the likelihood of his graduation, prom and freshman year of college football.

“I hope the season doesn’t get canceled because I’m trying to play, I don’t want to miss a year…I’m ready to get going,” he said. “Everyone taking a year off football—that’s a lot of time.”

The 235-pound defensive end player was set to move to Baltimore in June and condition with his teammates for two months before the semester began. But when Morgan issued a campus-wide shut down in March and ceased all on-campus activities until further notice, Chaudhry began to diet and exercise at home with the hope that he’d touch the university’s newly renovated field in the fall.

“I was going to the gym before all this happened but I started lifting furniture, lifting my brothers and doing push-ups—whatever I can,” he said. “I just want to play.”

Morgan Athletic Director Edward Scott said student-athletes like Chaudhry, who’ve grown up in a world surrounded by competition, have been forced to put their sport on hold. Without the physical guidance of their team, they’ve been left to figure it out from home.

“Whether I like it or not, I find that a lot of student-athletes tie their self-efficacy and their self-worth to playing their sport,” Scott said.

The university will live stream a recognition ceremony for this year’s graduates and President David Wilson said he’s prepared to make a decision about the fate of fall semester by mid-summer.

According to The Princeton Review, the virus will influence 70 percent of all students to attend college approximately three hours from their family’s home. But 11 hours stand between Chaudhry and Morgan State.

Until Wilson makes a decision about the fate of fall semester, Chaudhry is left to wonder when he’ll meet his new team face-to-face.

“When you add all those variables in and then the uncertainty of not knowing exactly when [Chaudhry] will be able to come to college—when we thought he was mentally prepared to, I think that does add several layers of complexity to the situation that we’re facing,” Scott said.

Morgan’s on-campus events geared towards incoming students including tours and Access Orientation, a week-long program designed to acclimate first-time freshman students to campus, have traditionally been used to support students’ transition into Morgan. But because of the pandemic, all programs will be online.

Morgan Admission Officer Zachary Rogers, who’s been teleworking since the campus-wide closure, services more than 10 students daily. He said the admissions sector has experienced an increase in traffic since its transition online.

Morgan has begun to accept petitions for test-optional statuses for students who cannot take the SAT or ACT. Rogers said while the office will be granting approval on a case-by-case basis this year, the university is exploring the possibility of it being a standard by 2021.

“Just because the pandemic is going on, we’re still reaching out like we would have been if things were normal,” Rogers said.

Many graduating seniors who dreamed of opening a stuffed rectangular envelope with their respective university colors, will now receive their decision electronically. A method many colleges including Morgan have recently adopted to curb the spread of the virus.

Rogers said his office has continued to remain positive in its mission to make students feel welcome—and that’s exactly what sold Chaudhry on Morgan months ago.

Originally, he wanted to remain close to home but when he and his father Aamir Chaudhry visited campus, they decided Morgan was the best fit.

“The way [Coach Wheatly] presented the idea of coming to the school, as well as the business operations and education operations around the area is what sold me,” Aamir Chaudhry said.

Chaudhry is finishing his last weeks of high school online and spending time with his three younger brothers at home. But as the weeks of schooling wind down, many students, including Chaudhry, can’t help but mourn what could’ve been.

Chaudhry is set to attend Morgan State in the fall with a full athletic scholarship.