‘It’s not a commencement, this is a ceremony’: Morgan postpones graduation, live stream takes its place

More than 1,000 graduating seniors suit up to log onto first virtual recognition ceremony in Morgan history 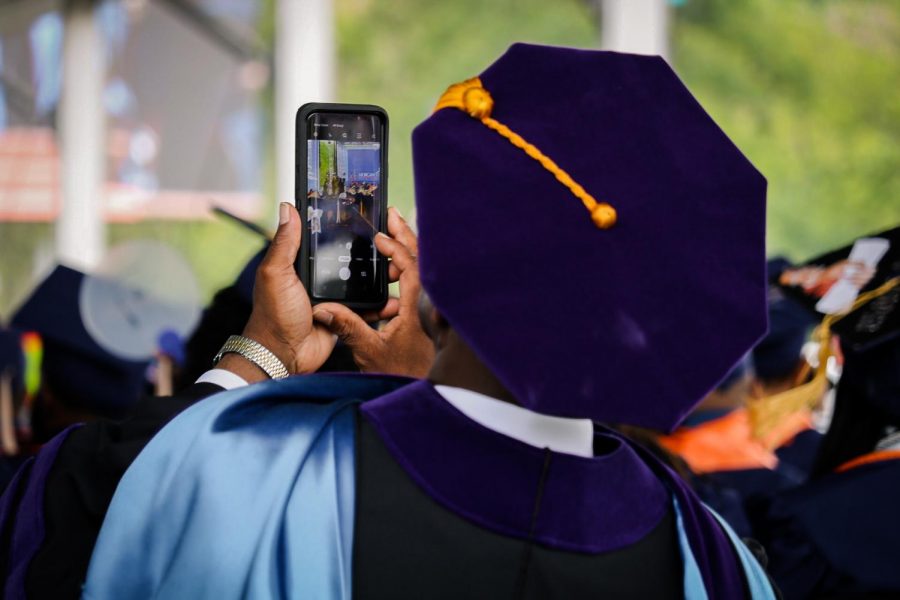 When the university announced its decision to live-stream a recognition ceremony to highlight its graduating seniors on May 16, it created a smorgasbord of reactions. But according to a member of The Morgan State University Commencement Committee, the virtual event will not replace the traditional commencement.

The live stream is set to include a presentation from President David Wilson and Lesia Crumpton-Young, the university provost and vice president for academic affairs. The ceremony will also include a recorded message from the dean of each respective department.

“Even though the coronavirus is going on and we’re online and everything is shut down, we didn’t want the May date to pass without doing something to recognize the graduates,” said Edwin Johnson, a member of The Morgan State University Commencement Committee.

For many students, including actuarial science major Shane James, commencement isn’t just an event for the graduate, but the entire family.

“For me and a few others, we’re some of the first in our families to graduate college and that’s a huge accomplishment,” James said. “People won’t get to celebrate that ceremony in person.”

Wilson is planning a commencement ceremony in the fall to honor spring 2020 graduates, according to Larry Jones, the assistant vice president of public relations and strategic communications. But until then, spring graduates are encouraged to attend the virtual recognition ceremony.

“There will also be some additional flourishes throughout the streamed ceremony and we’re asking all of the graduates to watch online until the end for a special surprise,” Jones said.

In an email addressed to the spring graduates of 2020, The Morgan Commencement Committee said the institution waived the cost of academic regalia if students order online through the university bookstore by Thursday. The package will include a cap and gown, bachelorhood, tassel, zipper pull and a stole.

“The University wants its students to have a memento of their spring 2020 graduation from Morgan, the committee said in an email on Thursday morning. “This is to honor your hard work and accomplishments in overcoming the challenges of COVID-19 and receiving your degree during this historic time.”

Although Morgan has implemented an alternative plan until an on-campus graduation is possible, students including computer science major Stephen Thompson Jr. wants the real thing.

“In terms of the content and the way it’s going to be structured, I’m not really expecting a lot…I know they’re going to try and I respect them for trying, but we want to see the real thing in person,” Thompson Jr. said.

While many students were disappointed in the news of a virtual ceremony, others including Senior Class President Imani Dews was relieved that her big day won’t go unnoticed.

“I would’ve been disappointed if the day came and went without any recognition,” Dews said. “I appreciate Morgan going the extra mile to make that day special.”

The ceremony will be live-streamed via the university’s commencement website on May 16 at 10 a.m.

“As long as I get the degree, that’s what really matters,” James said, “But at the same time it’s disappointing because I had so many family and friends that wanted to come to graduation to see me walk across the stage.”