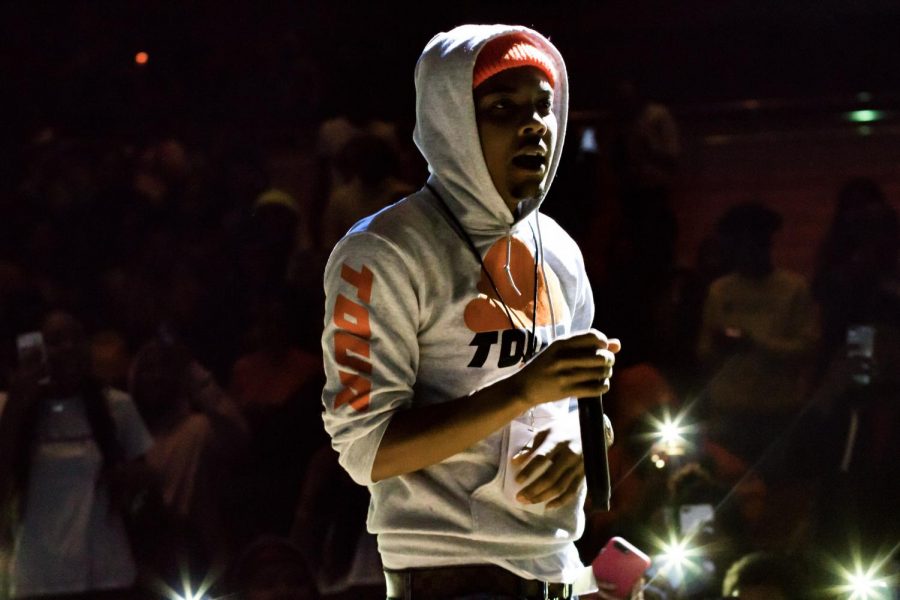 Rapper G Herbo, who performed at the I Love Morgan Concert in 2018, took the Morgan stage again six months later.

When Morgan State ceased face-to-face instruction for the remainder of the semester, many students believed that the university would scrap I Love Morgan Week (ILMW). So when the Campus Activities Board (CAB) announced that the school’s most anticipated event of the spring would transition online, many students were curious about how it would translate online.

CAB announced ILMW’s event list on April 19. With one event scheduled for everyday of the week, students are encouraged to participate in a virtual home decor challenge, talent show, game night, concert challenge, university appreciation day and a DJ party.

The ILMW concert, which is traditionally held in the University Center Calvin and Tina Tyler Ballroom, typically costs $20 per ticket with a valid university ID. But a DJ party, hosted on Instagram Live, will take its place on Friday at 9 p.m. free of charge.

Alia Knight-Kemp, CAB’s chief of staff, said students are glued to their phones and understand the nuances of social media. So it was a no brainer to take advantage of students’ technological comfortability and strive for a week close to Morgan’s spring tradition.

“It’s giving students something positive to look forward to,” she said.

While some students are skeptical of how successful the week of events will be, sophomore Raniya Holmes said she’s excited for the first virtual ILMW in history.

“I’m always excited to pop out and you know—attend events now,” she said.

Holmes, a social work major, gained attention on social media when she was filmed on stage while Megan Thee Stallion made her university debut last year at ILMW’s concert. This year—she’s looking forward to enjoying the festivities from the comfort of her home.

All virtual affairs are free of charge.

An earlier version of this story incorrectly stated that I Love Morgan Week would include a virtual concert. Instead, Morgan State’s Campus Activities Board scheduled a virtual DJ party. The MSUSpokesman regrets the error.