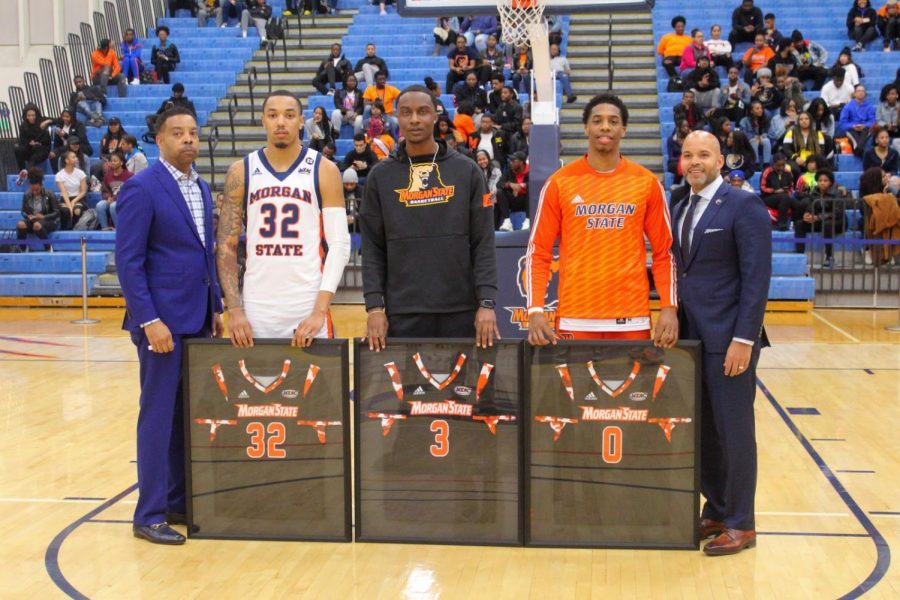 The Bears lost their final home game of the season to the Norfolk State Spartans (68-62) on Thursday in the Hill Field House and if it was a traditional game—the morale would’ve been low. However, emotions flew high as the team celebrated seniors Stanley Davis Jr., David Syfax Jr. and Victor Curry fell with framed black and orange personalized basketball jerseys.

Senior forwards Syfax and Davis totaled 25 points on Thursday and although Curry was benched the entire season due to hypertrophic cardiomyopathy— a rare heart condition—he was honored alongside his teammates.

“The lost hurt for sure, my last game played here,” Davis said. “We just took a loss as a team.”

Throughout the game, the Bears and Spartans were in a constant battle for the lead, with a total of five back to back lead changes.

In the first half, the Bears kept the lead up by two points until they made several turnovers and fouls, which gave the Spartans a 9-point lead.

Despite foul calls that didn’t go in Morgan’s favor, the team managed to cut the lead to seven points before the end of the first half, 32-25.

The Bears went into the second half with momentum and intense defense.

Sophomore guard Malik Miller, Mid-Eastern Atlantic Conference’s (MEAC) defensive player of the week, earned a double-double, 13 points and 10 rebounds. Although he stepped up in the second half, the team failed to execute plays and struggled with fouls.

“In the end, we were turning the ball over and we needed those plays to make every bucket,” Miller said. “We got to get better at execution and running the plays—defensively, we have to lock in and minimize the turnovers.”

For the remainder of the second half, fouls were called but the Bears continued to fight as sophomore guard Isaiah Burke, the lead scorer of Thursday’s game, who scored a total of five 3-pointers, cut the lead to one point, 44-43.

Although the score was close and sophomore Sherwyn Devonish-Prince followed with another three points to tie the game up, the Bears’ trend of fouls, 24 in total, allowed the Spartans to jump in the lead.

The Spartans managed to take the ten-point lead with 3:58 left in the game and with the failure of three crossovers, the Bears lost the game.

In the seniors’ final game collegiate game and Morgan’s last home game of the season, the Bears were defeated, 68-62. The team finished fifth in the MEAC conference and is set to enter the tournament on Tuesday to which team captain Stanely Davis Jr. said the group will spend the remainder of the week preparing for the challenge ahead.