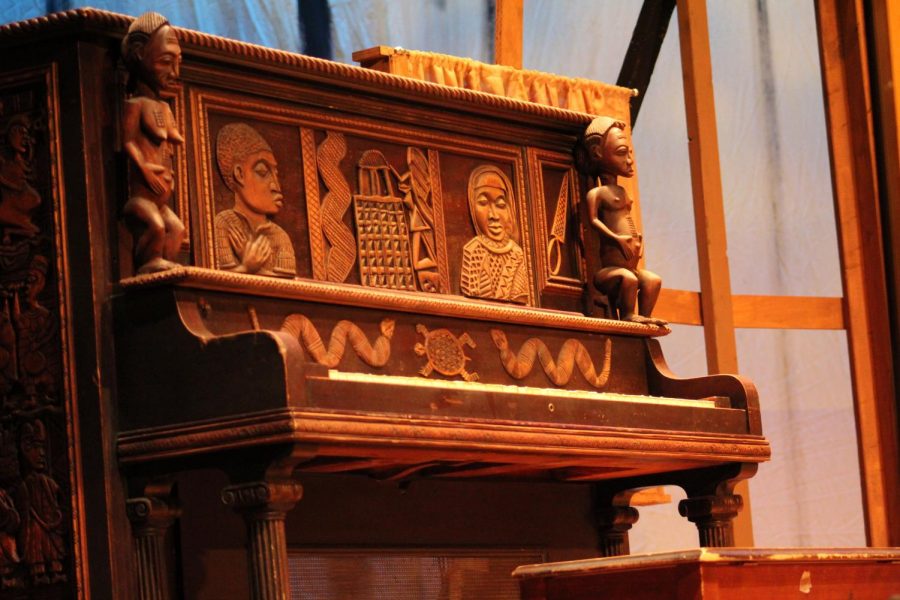 The Charles' family piano, which was left to siblings Boy Willie and Berniece.

Trauma, fear and forgiveness are the building blocks of August Wilson’s “The Piano Lesson,” a 1987 Pulitzer Prize-winning play. While its foundation doesn’t sound like something that could belly its patrons over in laughter, it manages to remain light in commentary, as it pulls at the heartstrings of a theater packed audience of all ages. The two-hour play, set in Pittsburgh, PA during the aftermath of The Great Depression in 1936, follows an African American family and the arguments that derive from their family heirloom—a 137-year-old weathered dark wooden piano decorated with African sculptures.

With dialogue intertwined with singing, dancing and good old-fashioned storytelling, costume director Sharlene Clinton remained authentic to the play’s time with the incorporation of high-waisted trousers, overalls, applejack hats and suspenders. Director of Theatre Shirley Dunlap, who previously directed Wilson’s “Fences,” kept the integrity of not only the time but black culture.

The audience is taken back to a decade where coffee is five cents and a breakfast platter is 15 cents, a small but rather important detail made clear by Morgan State alum Quincy Vicks’ performance of Doaker. Conversation glosses over slavery, religion and the patriarchal family dynamic on the one-set staged set, complete with flower-embroidered wallpaper in the living room. However, what impresses many is the simple detail of steam that dances in the air as boiled water pours from a tea kettle.

When discussing the makeup of a classic play, you may revert to an idea that no longer relates to this day and age—a reality of more plays than I would like to admit. Therefore, if you dwell on the tension between Kenyon Parson and KaVonya Moore’s characters of Wille and Berniece, you would subconsciously feel obligated to take sides. However, the eight-cast team brings a sense of the 21 century to the timeless script with the conversation of sexuality—a topic Millennials and Generation Z have overused, but is entertaining nonetheless.

As a member of the audience, you’ll have no choice but to feel a sense of attachment to Berniece as she struggles with the desire to be loved by a partner but masks it with the dire obligation of a single parent to her daughter Maretha, performed by 9-year-old Blake Smith. Therefore, although Greg Coulter’s performance of Lymon is half-baked, when he kisses Berniece, the audience silences and everyone holds their breath in anticipation that she’ll give into temptation.

It’s clear that the Pulitzer Prize-winning play has a strong African presence on stage as the sound of drums and the blues classic “Hey Hey” by Bill Broonzy echoes throughout the theater. Wilson uses magical realism as a vehicle to address themes of ancestry, life and death and womanhood as the characters confront the internal struggles that many African American families face.

Although Murphy Fine Arts Center has closed its curtains for this production, Theatre Morgan is set to perform at the August Wilson African American Culture Center in Pittsburg, PA on March 12 at 6 p.m. as part of the 2020 August Wilson Society Biennial Colloquium.