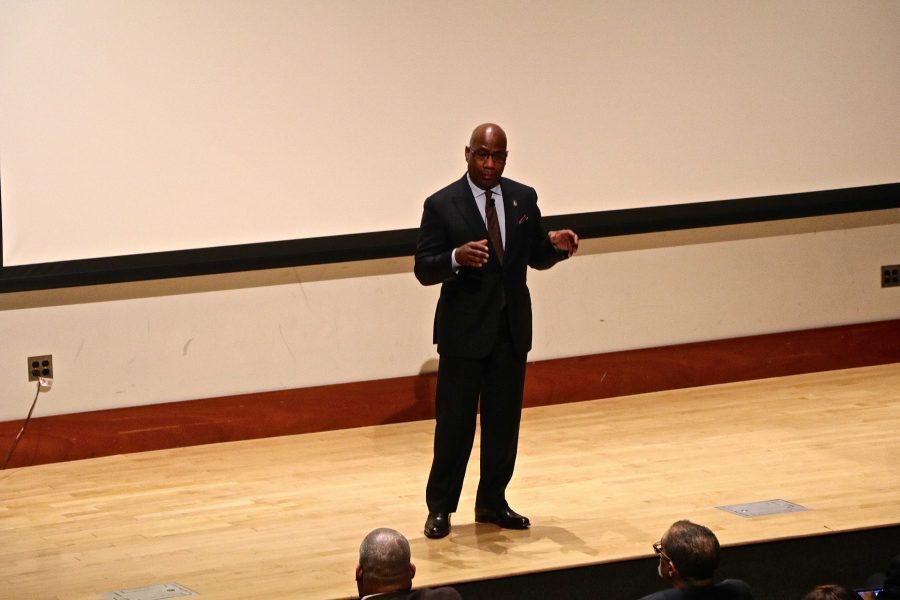 “Over the past five years, we have been very interested in Africa and have been eyeing expansion into new markets,” said President Wilson in a February press release.

Beginning the fall of 2020, Morgan will offer various master’s degrees including business administration, global multimedia journalism and communications and a Bachelor of Science in Entrepreneurship.

Wilson said if the program shows progression after three years, a Morgan facility will be built in Ghana.

While some members of the audience were satisfied, others sat in disapproval with concerns such as building displacement amidst university construction and Marble Hall Gardens Apartment’s internet issue.

Junior psychology major Justiss Gilliam said the lack of internet connection has made it difficult to complete her school assignments and placed her in an inconvenient position, in which she’s forced to stay on campus to finish her work.

“They send people in to fix it but it’s the same result every time,” Gilliam said. “I’ve contacted my [resident assistant] and the resident director about this—it just doesn’t work.”

President Wilson said the connection concerns were addressed last year but motioned for Kevin Banks, the vice president of student affairs, to tackle the issue.

That was a similar theme when questions about displaced Reserve Officers’ Training Corps students emerged. Wilson looked to Kim McCalla, the associate vice president of facilities design and construction to address the concern.

The Turney Amory building closed indefinitely last year as the new health and human service building is set to open in 2024. With the goal to begin construction in 2021, students have been relocated to MCMechen Hall, to which many claim its an inadequate amount of space to practice.

McCalla said the new space will be properly renovated for students and within the next 10 years, the university will build a wellness center on the east side of campus, which will be used to house the appropriate programs.

Several students requested the status of the newly anticipated on-campus housing complex, to which Wilson compared the journey to a stair climb.

Fall of 2022, the practice field, adjacent from Thurgood Marshall Apartment Complex, will be home to the highly anticipated apartment and suite-style living space. The new design includes a dining facility, so the traditional Rawlings Dining Hall will be repurposed.