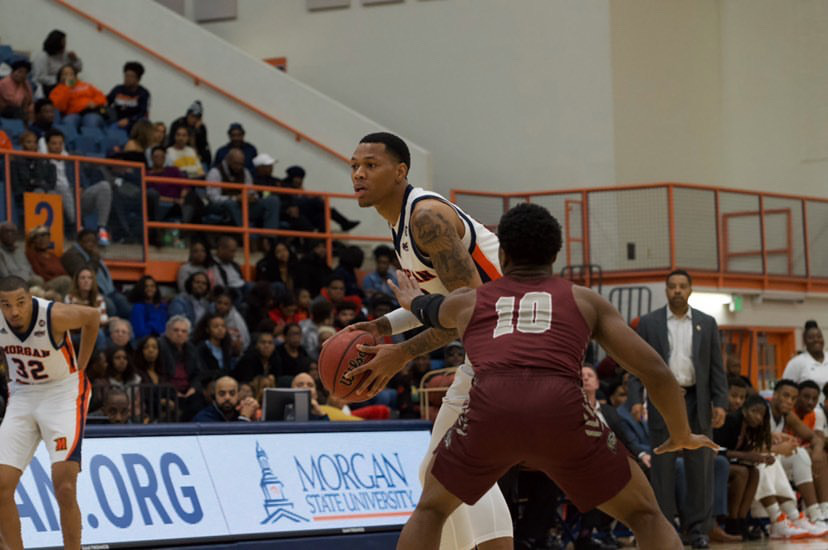 Forward Troy Baxter Jr. looks for a pass during the game.

The Bears defeated Maryland Eastern Shore, 61-53 in the Hill Field House on Saturday.

Guard David Syfax’s 15 points and six rebounds helped Morgan tackle thier fourth game of their winning streak, which placed them fourth in the conference.

“We really just focused on coming out here and getting a win, play hard as possible,” Syfax said.

Guard Malik Miller also chipped in with 13 points and six rebounds. The game was tied most of the first half until he scored a layup and made the score 26-23, with less than two minutes on the clock. The momentum of the first half was carried throughout the game as Morgan never lost the lead.

“I just want to play hard and give it all I’ve got every game,” Miller said. “As long as I’m playing good defense everything else seems to come with it.”

Morgan went on a 10-3 run and the Eastern Shore Hawks struggled to recover at the beginning of the second half. Only two of Maryland’s players scored in the double digits, including their starting forward AJ Cheeseman, who fouled out with three minutes left in the game.

Morgan allowed the Hawks to bring the lead down to single digits due to careless turnovers. However, it wasn’t enough to erase the deficit.

Head coach Kevin Broadus said he was impressed by how the team managed to start and finish strong.

“I’m just proud of the way these guys competed for 40 minutes,” Broadus said. “I’m glad the way we finished and we just gotta just keep marching and keep getting better.”