A ‘Back and Forth’ Conversation with Joy Postell 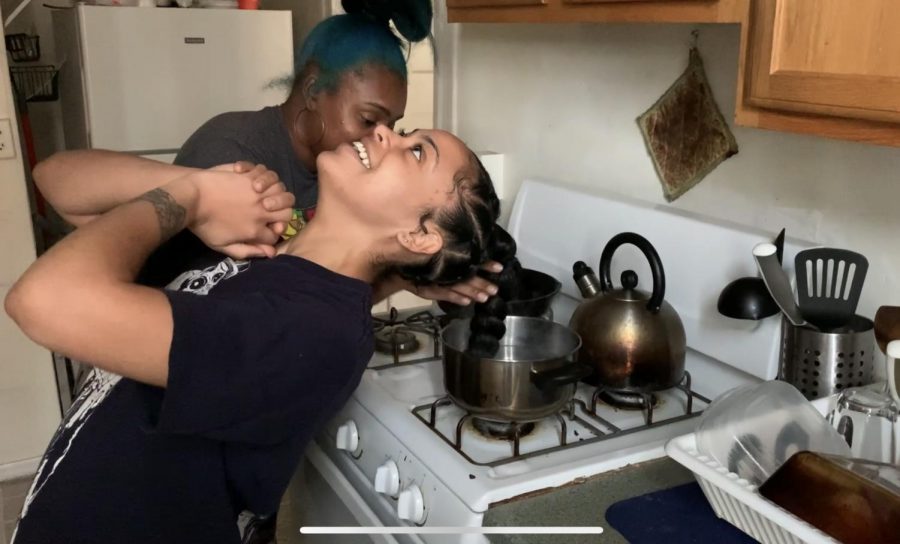 With lyrics that cripple your thoughts to beats that you can feel in your chest, singer and songwriter Joy Postell’s eccentric taste is evident in her music. A sound unique to her counterparts, she embodied a socially conscious sound in 2018’s “Diaspora.” Two years later— she’s eager to talk about something new.

The 28-year-old Tupac Shakur loving, chicken-wings-after-a-workout junkie is not afraid to discuss her therapy sessions to over 6,000 Twitter followers. As the door opened to a building that’s on-brand to Baltimore City—aged with natural light, she stood in an OBEY brand black and white t-shirt, black lounge pants and purple-glitter slippers. With a half-cooked smile that was both welcoming and timid, she cruised down the stark white hall of her one-bedroom apartment and into a space that any black girl is familiar with—a living room cluttered with hair extensions and miscellaneous synthetic strands that didn’t make the style of the week.

Unlike most homes in the 21st century, the television wasn’t the centerpiece. Instead, it was her bookshelf assembled with dated magazines, novels and old-school vinyl records. With a collection of her size, many would credit a family member’s generosity. However, she attributes a Los Angeles dispensary where she traded marijuana for records. The Manhattan-born, Baltimore and Los Angeles raised rising star is adamant in her demand for peace. She has refocused her energy after the release of her debut EP, “Diaspora” and created 2019’s “Back and Forth,” in just three months. In a political climate described by the independent artist as “reality television,” Postell noted that she’s shifting the focus of her new music away from the black lives matter movement. She exuded confidence as she sat in the right nook of her rustic-colored sofa. Her head, for which each strand of hair was smoothed, swooped and secured with a rubber band elastic, rested on her right hand. The water-stained wooden coffee table, which centered the room, was decorated with miscellaneous hairpins, a black ink pen and a green sticky note filled with her to-do list. Her BIC lighter and Raw Organic Rolling Papers were perfectly positioned on the table’s bottom shelf and as she shifted to a posture similar to a sidelined basketball player—hunched and focused on the court—we began.

Hip Hop group Warm Brew was your first chance to record a song. How were you approached with the opportunity?

I did covers on my USB mic and I put some covers on SoundCloud. They just got a bunch of plays and they stumbled across me. They reached out to me on the internet—Twitter specifically. They were like “Yo you’re really tight and we want you to sing on this hook,” and I was like okay!

Who were your musical inspirations growing up?

Well, I have like a bunch of Stevie Wonder, Tina Marie, Chaka Khan, Stevie Nicks, Michael Jackson—that’s really what my mom was playing. A lot of Chaka Khan is a staple voice growing up.

When you hear the phrase “commercial part of the industry,” what do you think of?

I feel like it’s the league…It’s just levels and it’s not what’s better or worse. I think it’s what aligns with who you are as a person and I think commercial just means you are probably signed to a major label but more importantly, they actually care about you because major labels sign a lot of people.

What was the reason behind remaining independent?

I just haven’t been offered anything that I could align with. It’s not necessarily like, oh, I’m gung ho on it. It’s just that I haven’t been offered a deal that I feel doesn’t compromise my integrity. Realistically, I’m open to aligning with something more industry-oriented but until that aligns with my spirit—I don’t see myself kind of selling myself in a negative way.

What’s the difference between coming up as an artist in the 21st century, as opposed to the 70s and 80s, even the 90s?

There are certain things that you really couldn’t fake the funk in that way. I feel like a lot of it was also based off of live performances. If you had people touring like a Billie Holiday or like a Dorothy Dandridge, they could only do a certain circuit. So, people really only knew about them from their live performances because it was a lot of money to record back then. You couldn’t just pick up and record on a laptop right? So, you almost had to have a label behind you.

Were there sacrifices to making socially conscious music?

I was probably like 21 when I started working on ‘Diaspora’ subconsciously. I’m never going to drop another album that’s talking about Black Lives Matter—period. I don’t want to exploit that topic by continuously beating a dead horse. I’m definitely an artist that’s like, I said what I said and if you want to know how I feel about something, you can look back at chapter one—but I’m on chapter five.

How do you feel about the political climate right now?

I’m not into policies like that. I’m more of a conversationalist. I don’t watch the news and shit like that but when I briefly dipped into it, I don’t think anyone running against Donald Trump has that star power that he has. Donald Trump is like a fucked up star. He’s a star and it’s hard to outshine this really evil demonic star. Politics is like reality TV. They’re all lying it’s just who’s selling you the best, who’s lying to you the best.

How do you manage your mental health?

I have therapy. I usually go to the gym, haven’t been in a week but that’s just helped me a lot. I  journal and I also don’t keep that many people around me. I’m such a cancer bro, like I’m a cancer, so I absorb everything. I’ll make sure somebody eats before I eat and that is detrimental. I think cancers get a bad rap. When you care so much and you put everything before you, eventually you’re going to get tired of it, you know?

What’s the meaning behind your favorite tattoo?

Take me back to a time when you felt most inspired.

What was the difference in the approach of making ‘Diaspora’ and ‘Back and Forth?’

‘Diaspora’ took hella long because I was hella scared to put out music. In that capacity, I was putting all these unnecessary pressures and ‘Back and Forth,’ I made that in three months because I was like, all right, and just did it. So I feel like every time I drop I get better at it.

What are you working on right now?

I’m working on my album, been working on it for two years. Just kind of not rushing because I

Who are your biggest supporters?

I’m my biggest supporter. That sounds weird. I always have people around me that support me like my friends, but I think that’s because I don’t share too much with people.

Why did you cut your hair?

I cut my hair once. First I cut all my hair off in high school because Rhianna had her haircut and I needed that cut—the one with the rat tail. This other one, I had just got out of a bad relationship, I was in LA for the summer and I could’ve gotten a trim and I cut it to like a bob. I was like, I’m gonna cut it all off. I don’t think it was necessarily the driving force but it was definitely like, I need a reset.

I’m just off of music right now…It’s hard for me to stay at a job to be honest. I guess I just haven’t found the right fit for me. Maybe I won’t, maybe I’m just not probably not supposed to be working, like in that capacity.

If you’re on your phone, what are you most likely doing?

Bullshit. Probably ready my horoscope or some random astrology shit. I’m a YouTube junkie. I’m always on YouTube, a little too much. I have YouTube Premium because I don’t like commercials—I’m on it that much. I’m paying $12 a month to watch it with no commercials.

How would you describe your style?

Sporty chic laid back with a touch of art. I just wear whatever I feel comfortable in and sometimes I wear things that are a little uncomfortable, but nothing too far out of my comfort zone.

Yo, I love sushi, but that’s not cheating—that’s healthy. Chicken wings, duh. Chicken wings are a staple in my diet. I literally eat chicken wings after the gym.  Chinese food, I love Chinese. I’ll probably get some Chinese food today. Like, even though I’m supposed to be saving money, I’m probably gonna spend eight dollars on that. You know, lunch from Yums is fire.

What advice would you give your younger self?

Probably just be in the present moment because I’m such a mastermind and trying to think like 10 steps ahead. Just cherish the moment because you don’t even know how long you gonna live anyway. So, you might as well just enjoy what you’re doing right now and not be in it for the outcome.

What is the sacrifice of being independent and choosing to wait for that opportunity to where it feels right versus maybe sacrificing that for more plays or exposure?

My pockets, cuz I’m not fucking rich. People only get to see the glory. Like you don’t get to see when I’m late on my rent, or when I’m behind on my BEG, or when my phone is turned off because I just went up to New York. I’m crazy, I’ll go and do my music shit and because I’m in it I’m just like, well, you know, I know the bills will get paid. It’s just kind of that nonchalant energy with money with me. I feel like it’s a good way to be with money because when it’s here, it’s here, when it’s not, it’s not.