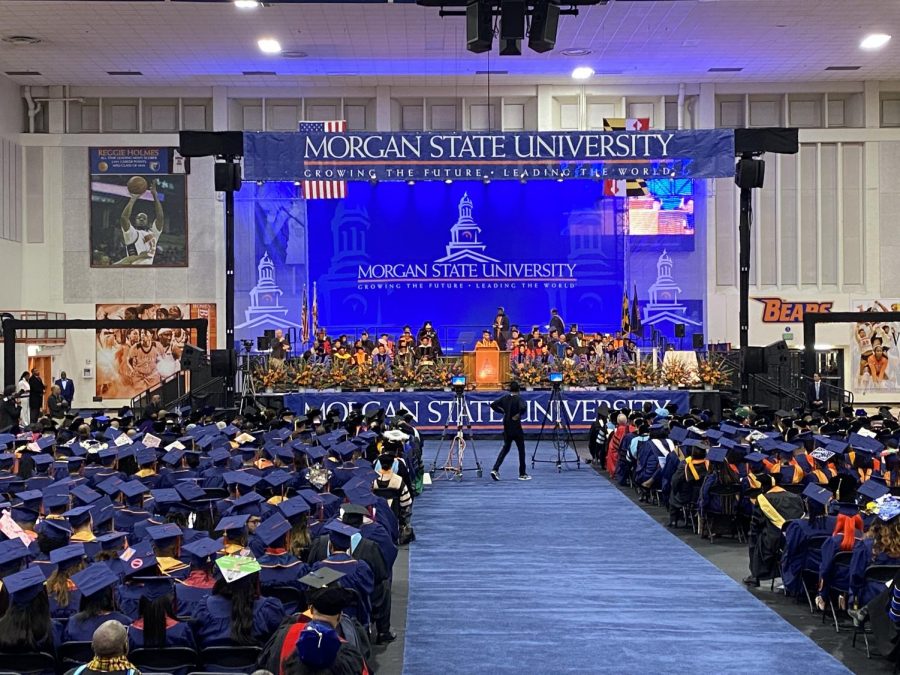 Gray cloudy skies released raindrops on Morgan State’s campus, but the eerie sky didn’t overshadow the glowing smiles of the graduates. They wore navy blue robes and multicolored stoles that illuminated the path to the Hill Field House. Among them was Samuel Orelaja, an international student and industrial engineering major, who had passed seven consecutive semesters with a 4.0 GPA.

A golden stole embroidered with the word “honor” lay across his neck.

The Fall 2019 Commencement, on Friday, Dec. 3, featured a historic number of  79 awarded doctorate degrees and Over 100 undergraduates received their bachelor’s degree.

The commencement speaker Congressman James E. Clyburn (D-S.C.) excited the crowd with a promise to have a brief three-point speech. He proceeded to share a fable his father taught him.

“The first sign of a good education is good manners,” Clyburn said. “So if that is true I want this graduating class to stand and say thank you  to…whoever paid the bill for you.”

Orelaja, a Nigerian native, wasn’t able to frequent his home every break, but he created a family out of his professors and faculty members.

“I’ve met a lot of professors that you know most of the time it feels like they are my cousins or something,” Orelaja said, “That family mindset goes a long way.”

Among the recipients was electrical engineer Jesse Russell, who received an honorary degree from the university. Russell is a pioneer in the communications technology industry for extensive work with 4G and 5G wireless technologies.

The graduates under the direction of designated university faculty rose row by row.

They proceeded to the right

side stage ramp, group by group, with beaming smiles.

Navigating through college is often a combination of successes and failures. Clyburn encouraged all the graduates to continue to persevere.

Orelaja was among the many graduates who applauded Clyburn at the conclusion of his speech.

Reflecting on his 4 year journey, Orelaja admitted that being goal oriented and optimistic was vital in his journey to graduation.

“Nothing is impossible,” he said. “Once you put your heart into it and put the work in.”

Prior to the graduates receiving their degrees Kweisi Mfume, Chairman of the university’s Board of Regents, shared his remarks.

“What lies behind you and what lies before you is of less significance when compared to what lies within you,” he said.